We have years of experience caring for families from all walks of life, cultures and faiths. Our unsurpassed staff and our family provide kind, caring, professional service. Each family comes to us because they know we are leaders in our profession who are dedicated to excellence in service, adhere to the highest funeral industry standards, and have exceptional integrity. We consistently earn phenomenally high customer satisfaction survey results.

Our licensed, professional staff is here for you 24 hours a day, 7 days a week. Please call 270-886-4455 anytime. We will even come to you to make arrangements in the comfort of your home.

Prompt, compassionate service is always just a phone call away, where and when you need it. 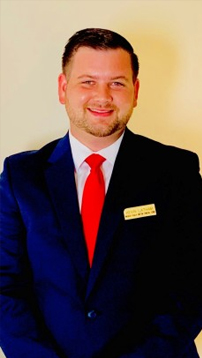 Kevin Michael Latham, age 29, was born and raised in Trigg County and is a 2011 graduate of Trigg County High School. He started in the death care industry as a senior while co-oping at a local funeral home in August of 2010. He then knew after the first care he provided for the very first family, that this is what he wanted to do with his life.

He then went on to be a 2013 honor graduate of John A. Gupton Mortuary College in Nashville, TN. Following his graduation he took and passed his national board exam and state law tests. He then acquired his Funeral Directors and Embalmers License in the State of Kentucky and also obtained his Crematory Operator License. Soon after he took a position here with Maddux-Fuqua-Hinton Funeral Home in August of 2015. He married the love of his life on August 20, 2016, Mrs. Harley M. Brown Latham of Christian County where she was born and raised.  Together they live happily in Christian County and have three children; Myles Thomas Latham born June 1, 2017, Kinlee Michelle Latham born May 26, 2019, and Harper Michelle Latham born April 21, 2021. Kevin and his family attends Edgewood Baptist Church in Hopkinsville. He has joined the Hopkinsville Rotary Club as a Rotarian.  In his spare time Kevin enjoys spending the quality time with his family and watching his children grow.

Kevin oversees all of the daily activities at the funeral home and his mission is to ensure that each family served receives the highest quality of care possible. 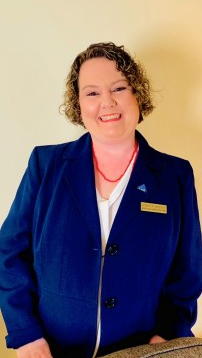 Jennifer is a 1995 graduate of Christian County High School. She and her husband Chris have two sons, Cody Lee and Corey Matthew; one daughter, Skylar Lynn; five grandchildren, Emilee, CJ, Greyson, Adaline, and Christopher. Her and her husband are both members of the Christian County Rescue Team. She also served as a member of the Hopkinsville Transit Committee and is on the Compassionate Friends Board. Jennifer and her family are members and attend Bainbridge Grove Baptist Church in Christian County.

Jennifer has always enjoyed helping others and has been with Maddux-Fuqua-Hinton Funeral Home since 2004. She obtained her Funeral Directors license in September of 2010. She takes pride in being able to provide compassionate service to families. She provides a level of personalization to the funeral services at Maddux-Fuqua-Hinton Funeral Home that is unparalleled in Hopkinsville and Christian County. 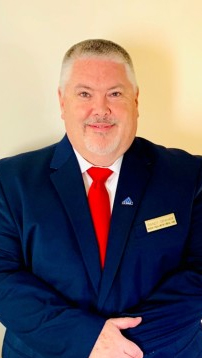 Randy is a Hopkinsville Native and a graduate of Hopkinsville High School and John A. Gupton College in Nashville. Randy and his wife Susan were married in 1986 and have one son, James. He has worked in a funeral home since 1997.

His dedication to the citizens of Hopkinsville and Christian County is apparent through his volunteer work and his decision to enter the funeral services industry, where he serves families with extreme compassion and empathy. 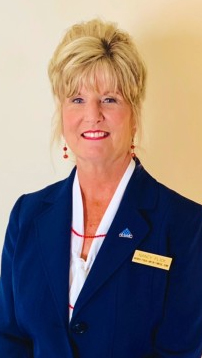 Nancy is a graduate of Plymouth-Canton High School and attended School Craft Community College in Livonia, Michigan.  She and her husband, Robert, have two children, Keith and Brooke, and are members of Edgewood Baptist Church.  Nancy retired from the United States Postal Service in 2015 after 30 years of service.  She also served as the Hopkinsville branch secretary of the National Association of Letter Carriers for 18 years.

Nancy and Robert enjoy volunteering locally in Christian County as well as golfing and spending time with their three grandchildren, Tori, Turner and Madden. 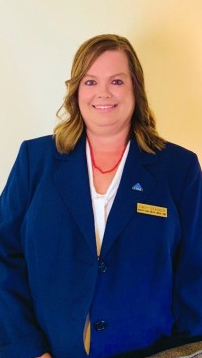 Cindy Stagner is a graduate of Christian County High School and attended Hopkinsville Community College. She is married to Lucas Stagner. Cindy has two children, Jacob Hyde and Kimberly Hyde and two grandchildren, Mason and Logan. Cindy works for the Christian County Attorney’s Office and Foster, Soyars & Associates law firm. She is a member of Concord Baptist Church. Cindy enjoys volunteering with the Christian County Rescue Team, where she serves as Secretary/Treasurer. Cindy also serves on the United Way Board since 2016.

Stop by and meet Cindy and all the staff that are here to help you at anytime. 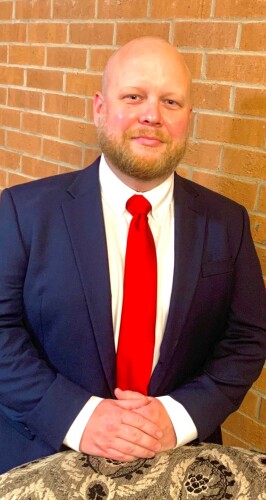 Born and raised in Hopkinsville, Trent is a 2000 graduate of Hopkinsville High School. After earning his Bachelor of Science Degree from Murray State University in 2004, Trent became a Probation and Parole Officer with the Kentucky Department of Corrections. After 13 years with the State of Kentucky as both an Officer and Assistant District Supervisor, Trent shifted directions and is now employed by Metalsa (Hopkinsville) as the Assistant Human Resources Manager.

The people and families of Hopkinsville and Christian County are near and dear to Trent. He loves, more than anything, to help those in need and assist in making his community stronger any chance he gets. Trent has been an active member of the Hopkinsville Rotary Club since 2006 and recently served as Auction Chair and President of the club (third generation behind Father, Gary Haddock, and late Grandfather, Jack Haddock).

In October of 2008, Trent married Chelsea Leigh Somero of Nortonville, KY. Trent and Chelsea Haddock reside in Hopkinsville and now have three children: Reese (2010), Shiloh (2012), and Oakley (2014). Trent was raised as a member of First Christian Church, where the Haddock family still remain members today.

Stop by and meet Trent and all the staff that are here to help you at anytime. 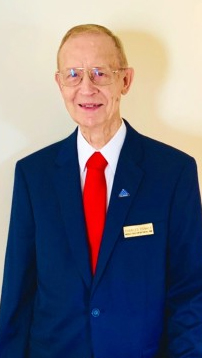 Charles Conkle, met and married Lida Dodson while stationed in Fort Campbell in 1962. After 31 years of service, Conkle retired from BB&T in Pembroke, where he also volunteered for the Pembroke Rural Fire Department, serving as treasurer for over 30 years. He is also a member of the Ruritan Club, PRIDE Committee of Pembroke and the Pembroke United Methodist Church. Charles and Lida raised two children and are currently enjoying their first grandchild, Christopher. Charles began serving as an ambassador for Maddux-Fuqua-Hinton in December 2007. 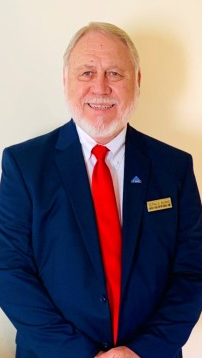 Pre-Planning is a vital and convenient service being offered today by Maddux-Fuqua-Hinton Funeral Home. Gerald Burke is the certified pre-planning associate. Gerald is a graduate of Hopkinsville Community College and an Air Force Vietnam veteran. He and his wife Cindy are members of St. Johns United Methodist Church in Hopkinsville. Gerald has served as pre-planning associate with Maddux-Fuqua-Hinton since 1996. 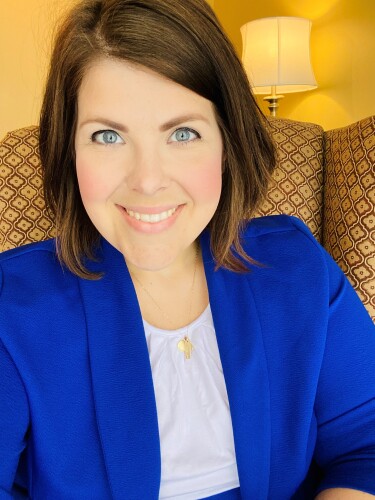 Kayla Stokes is a graduate of Trigg County High School and of Murray State University; where she earned a bachelors in Organizational Communication.  She is married to her best friend Michael “Zack” Stokes.  Together they have three children, Chloe (2009), Adaline “AJ” (2019), and Haislee (2021).  She is a member of One Church, in Cadiz where her husband serves as Pastor.  Kayla enjoys spending time with her family, being a connoisseur of food with her husband, running their Fry Fusion food stand business, and helping her daughter with her baking business Batter Up Bakery.

Stop by and meet Kayla and all the staff that are here to help you at any time. 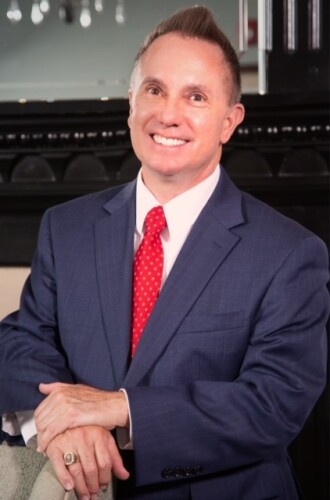 Jimmy is a native of Somerville, TN.  After graduating from Fayette Academy and UT Martin with a degree in sociology and a minor in psychology, He began a career path which led him to what he now considers to be his most rewarding role of counseling others on the importance of securing pre-need arrangements in advance.

Jimmy has been a pre-need counselor since 2003 and joined Maddux-Fuqua-Hinton Funeral Home in September 2021.  He married his wife, Lisa, in October of 2021. 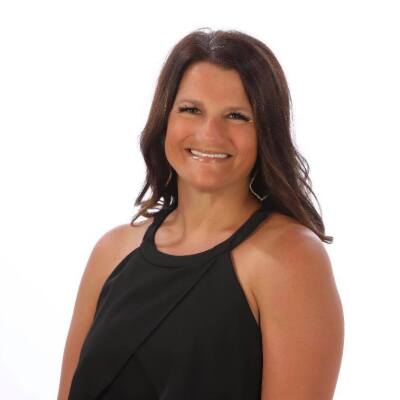 Stepheny is a 2000 graduate of Hopkinsville High School.  After earning her Bachelor of Arts in Communications from The University of Kentucky, Stepheny became a manager of Enterprise Rent-A-Car.  After 4 years with Enterprise, Stepheny became a sales account manager at T.RAD North America, serving customers domestically and globally for 10 years.  In 2020, Stepheny became a full time real estate agent working alongside her husband, Casey.  Both are agents with EXP Realty in Hopkinsville.

Born and raised in Christian County, Stepheny enjoys giving back to her community.  She is an Alpha Gamma Delta alumni, a Junior Auxiliary alumni, an active member of The Hopkinsville Rotary Club, and serves on the local Hopkinsville, Christian & Todd County Association real estate board.  Stepheny, Casey and their children are members of Saints Peter and Paul Catholic Church.

You are welcome to call us any time of the day, any day of the week, for immediate assistance. Or, visit our funeral home in person at your convenience.

About Us
Testimonials
Meet Our Staff
In Our Community
Our History